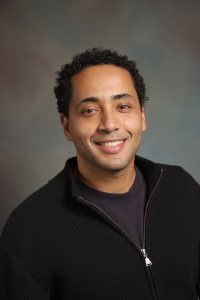 Eric Hurley is committed to doing research with implications for the social and educational outlook of African American and other minority children. He is especially interested in exploring the idea that all learning (cognitive development) takes place during social interactions and that, as a consequence, what develops necessarily reflects the social and cultural milieu in which those interactions occur.

Ongoing work in the DSC Lab has sought to address difficulties created by the fact that many racial and ethnic and minority children, whose cognitive and behavioral repertoires are derived from the Deep-Structure Cultural values of their home and community, find themselves at odds with classroom demands geared toward the values and priorities of the Euro-centered mainstream. These children find themselves forced (implicitly) to choose between academic success and maintaining a sense of identity and connection to their home culture. Things are typically further complicated by the racial tensions that are well documented in US schools. He and his colleagues have found, in a variety of studies, that infusing learning contexts with elements of students’ home culture can alleviate this troubling mismatch.

Another line of research reconsiders questionnaire methods of measuring people’s cultural orientations. These observations suggest that important between-Diaspora (Asian vs. African Diasporas) differences in the expression of similar orientations (such as group orientation) may compromise the validity of self-report measures used across groups. It also indicates notable within-Diaspora (African Americans and continental Africans) similarities. The work argues for extensive ethnographic redevelopment of related concepts and measures.

Select Williams facilities and events are open to the public. Admission tours are available and guests are welcome at the Williams College Museum of Art, Sawyer and Schow Libraries and outdoor athletic events. Visitors are also welcome at indoor competitions and some performances and events. Proof of vaccination and masking are required for entry. See the Visiting Campus page for details.
Bias Incident Reporting
Title IX Incident Reporting
Implicit Bias Workshops Sign-up
OIDEI Funding Requests
LAND ACKNOWLEDGEMENT We respectfully acknowledge that Williams College stands on the ancestral homelands of the Stockbridge-Munsee Mohicans, who are the indigenous peoples of the region now called Williamstown. Following tremendous hardship after being forced from their valued homelands, they continued as a sovereign Tribal Nation in Wisconsin, which is where they reside today. We pay honor and respect to their ancestors past and present as we commit to building a more inclusive and equitable space for all.